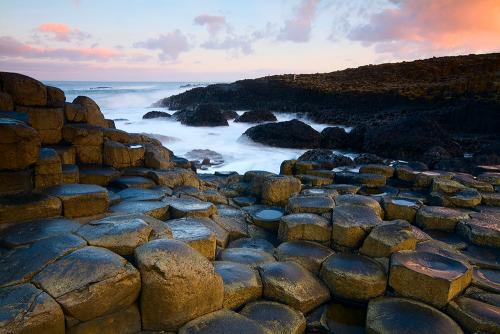 Blackrock House is on the Causeway Coastal Route, one of the worldâ€™s greatest coastal drives, where you journey along the winding seaside, dramatic white chalk cliffs and emerald glens all washed by the bracing Wild Atlantic Ocean. We are a 15 min drive to Northern Irelandâ€™s famous UNESCO World Heritage Site, the Giant's Causeway.

Step on thousands of basalt columns tumbling down into the Atlantic Ocean on the grand causeway. Itâ€™s an epic sight, with a whopping 40,000 hexagonal-shaped steppingstones, which date back to a volcanic age almost 60 million years ago. This iconic, geological landscape also tells stories of myths and legends where Irish Giants battles Scottish rivals and Spanish sailors shipwrecked with their golden treasure.

There are numerous paths and walkways, the most spectacular is the five-mile clifftop walk along this stunning stretch of the Causeway coastline which gets you away from the crowds. Pack you walking shoes and we will pack your picnic! Guided personal tours can be arranged with local guides and pick ups from Blackrock.